No One Goes There Anymore

Nobody goes there anymore. It's too crowded.

I have a serious medical condition. I don't use the actual name of it as often as I used to. People react weirdly when I name it, then act like I'm keeping secrets or something when I don't.

But, overall, it's less drama to make polite noises about having respiratory problems or claiming to have a paper allergy that I don't think I actually have, though papers do make me quite sick these days, than to use the actual name of my condition, which people don't understand and also react strongly to.

Just naming it makes people think I'm some kind of drama queen. I'm not, so I mostly stopped using the name for it, possibly at the cost of the truth to some degree, but it's been a big win socially.

So I've spent a lot of years trying to arrange my life around germ control. Among other things, I do remote work -- including blogging -- to avoid having to get "a real job" because most "real jobs" would be detrimental to my health.

Given that me and my oldest son have the same diagnosis -- genetic disorders tend to run in the family like that -- and it can cost up to a quarter million dollars per patient per year, doing gig work and living hand to mouth and being dirt poor is how we have avoided an estimated $9.5 million in medical expenses in the last 19 years since I was diagnosed while getting healthier, something the world says cannot be done.

So when the pandemic began, it barely impacted my life. Germ control is already my life.

Getting to that point, where a global pandemic was kind of an annoying blip in my life, was a long strange journey. It included nearly six years of homelessness.

While homeless, my sons and I routinely tried to find out-of-the-way public tables. For purposes of germ control, we didn't want to eat in restaurants and homeless people aren't welcome in restaurants anyway. So we would get takeout and go find a table somewhere outdoors.

Much to our annoyance, this popularized some of our favorite out-of-the-way eating places. We would have to find some new spot to take our food and eat without being surrounded by coughing, sneezing, germy, annoying people.

We began routinely saying "No one goes there anymore. It's too crowded."

At some point, we talked about the Yogi Berra saying and why he might say it, why it's funny and why it may contain a grain of truth or wisdom.

He was famous. Maybe he had the same problem we had while homeless: Wherever he went to get away from it all soon became the new hot spot. Then maybe he had to find someplace else to go to avoid the crowds.

Maybe when a famous person says something like that, the subtext is "No one who is anyone goes there anymore. It's been taken over by the unwashed masses. It doesn't serve my needs anymore. Me and my rich and famous friends no longer hang out there."

I know a lot about germ control. Germ control is my life.

And no one wants to hear it because the very process that was necessary to save my life has left me so socially isolated that people think I don't really exist or something. I spend all my time on the internet.

And people think I'm a ghost in the machine, a figment of their imagination, some teenager living in their parent's basement telling tall tales for shits and grins. In short, they think I'm a troll.

And then I start blogs with names like While the World Burns and Stop Touching Your Face that never get developed because snickering in the corner about how I have this figured out isn't something other people want to hear and it won't get the word out.

There seems to be no way to get the word out. In a world where any idiot can start a free blog, you still can't get the word out because the biggest barrier is not technical means to disseminate information, it's mindshare. It's getting past people's prejudices.

It's been said that things only change when the old guard dies. I'm tired of waiting for everyone to die so I can find my voice and share my story and help people in some way.

This is attempt number 3027 to find my voice. 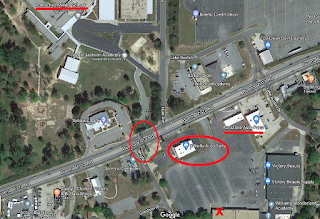 For most of my life, Clark had a barbershop on Buena Vista Road in a strip mall that seems to no longer exist. It looks like that strip mall was bought out and turned into an O'Reilley Auto Parts (circled in red). Click to Enlarge I've also circled the elevated pedestrian crosswalk nearby that helped orient me in this alien landscape that is no longer the Columbus, Georgia I knew growing up there. I used to take that crosswalk across the street sometimes to play on the playground equipment and in the open field in front of Roschild Middle School. My recollection is that there used to be a McDonald's where the Auto Zone Auto Parts is now. When I was a child, what is currently a sea of dilapidated blacktop parking was an open dirt field. It was mostly red Georgia clay and assorted other dirt with little in the way of plants. By the time I graduated high school, it was a thriving shopping center. For a time, someone had some goats in a fenced enclosure in tha